Ferrycarrig carried out the construction of a replacement underbore tunnel for an Ausgrid 132kV line that crosses beneath existing Illawarra main and local lines and newly constructed Sydney Water stormwater culverts. The works were carried out within the Sydney Trains live rail corridor and in close proximity to three separate existing transmission lines.

The scope of the project encompassed the remodelling of the existing Sydenham Station and Junction to facilitate a new station precinct, adjustment of existing Sydney Train rail systems, relocation of major stormwater channels, an aqueduct across Sydenham Pit and structural work to enable separation between Sydney Trains and Sydney Metro operations.

Key to the remodelling was the construction of a replacement underbore tunnel for an Ausgrid 132kV line that crosses beneath the existing Illawarramain and local lines and newly constructed Sydney Water stormwater culverts.

The underbore operations were carried out using a laser-guided Tunnel Boring Machine and pipe jacking method to install prefabricated concrete pipes of 1800mm external diameter. The two underbores were installed through excavated launch and receive pits at a depth of 6.5m.

Shoring for the deep pits consisted of a mixture of traditional trench boxes, sheet piling, and ground stabilisation through shotcreting. The Underbores were 84 metres and 35 meters respectively.

A new bank of conduits was installed through both underbores and connected together with an open-cut trench. Conduits were encased in a non-traditional low thermal resistant cement-based grout within the underbores. Standard thermally stable bedding was used to encase conduits at the open-cut sections. The works were carried out within the Sydney Trains live rail corridor and in close proximity to 3 separate existing transmission lines including Sydney Trains (33kV), Ausgrid (132kV) & Transgrid (330kV).

This project was high risk in terms of health and safety, environmental and commercial viability. Ferrycarrig delivered a high-quality utility asset to the client with zero lost time injuries and zero environmental improvement notices or incidents. This is a credit to the Ferrycarrig team and every person that worked on the project.

The knowledge and expertise gained by the Ferrycarrig team in carrying out this challenging project is of great benefit to future projects of this kind. 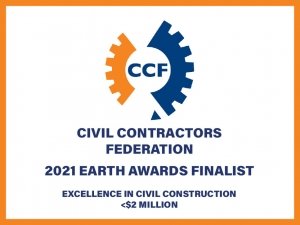 Ferrycarrig in the Running for Multiple Civil Excellence Awards